The voice of the teachers and students needs to be heard, so please help support this film.

Small donations are welcome, $1, $2, $5. Everything helps. You can donate anonymously. Please share this link with all your friends and fellow educators.

A $25.00 donation guarantees you a DVD of the movie. You will receive the dvd once it is available to the public. 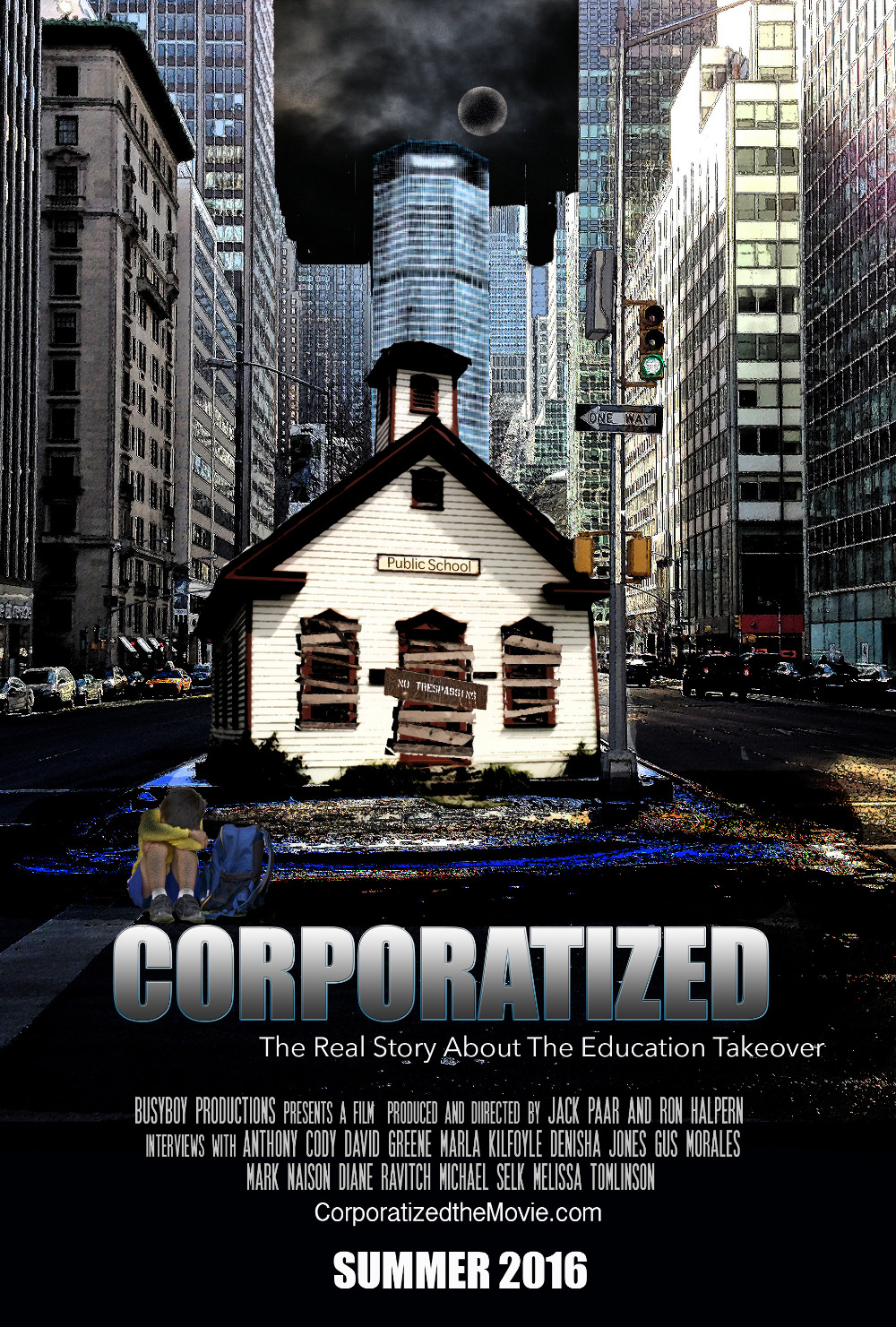 “It promises to be our battle cry and anti “Waiting for Superman” film. We are the super men and women.”

Filmmakers Jack Paar and Ron Halpern are creating a film that will blow the lid off of the corruption that is behind the corporate takeover of public education.

In 2014, Jack Paar attended a rally for teachers, parents, and students in Washington, D.C. with his wife, an elementary school teacher. Jack says, “Before the rally in D.C., I didn’t really know that big business was taking over our public schools, nor did I understand why it was problematic. I know that there are others who don’t understand the real problems with our public education system because big business is really good at blaming it all on the teachers. However, it’s not the teachers who are to blame. It’s the fault of greedy politicians like Scott Walker, Chris Christie, Andrew Cuomo, and Arne Duncan, who are owned by greedy, big business: Pearson Learning, Gates Foundation, Walton Family, Eli Broad, Koch Brothers, and Bradley Foundation. To them your children are simply a dollar sign. So, we’ve decided to create a film that will reach a diverse audience and provide them with hard facts and heartfelt messages from dedicated teachers, parents, and students.”

“Corporatized” pulls back the curtain on the charade to reveal how big business is doing a devastating disservice to our public school students, and how they are dismantling and destroying the teaching profession in the name of profit.

Each year, over $600 billion of taxpayer money is used to fund the U.S. public education system. In today’s era of privatization, it was only a matter of time before corporate education reformers figured out a way to get at that money. 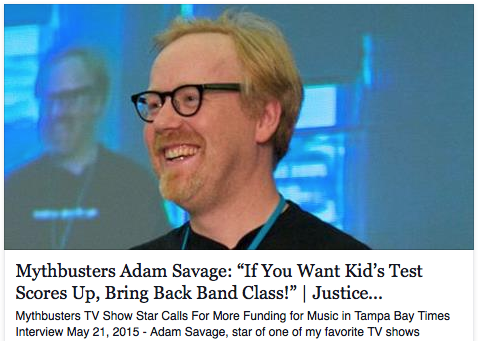 They didn’t just steal it. These savvy, corporate raiders are too smart for that. What they’ve done is create an elaborate scheme to funnel that money in their direction. The testing mania, brought on by No Child Left Behind, is part of their scheme. Sounds legit, and looks legit to the layman. But, the devastation this is causing to public education may be terminal… if we don’t take measures to stop it.

Schools are losing their funding. Teachers are losing their jobs. Parents are wondering what happened to the public school system in which they grew up. Children are being reduced to a measly test score. The once engaging, well-rounded education experience is being replaced by the mundane task of learning how to fill in the correct bubble.

If there is any hope of defeating these corporate “deformers”, we must all do our part to save our public schools from privatization. We may not have the money that these corporations do, but we can raise our collective voice to be heard. Students and teachers are people, my friends! In “Corporatized” we’ll reveal how they are fighting back.

“Corporatized” shines a light on the hypocrisy, shortsightedness, ineffectiveness, and greed of the corporate education reformers. We need your help to complete it, and get it noticed. Please help by donating and sharing our GoFundMe campaign.

Did you get any sort of heartache or tear-jerk feeling or some kind of emotional upset when you first saw this? Did you?

It is real. IT IS NAPLAN IN ACTION. It is part of the NAPLAN doctrine….to cause stress. It’s a form of child abuse, against all basic principles of the rights of the child.

If you don’t feel upset when you look at her now, then I hope that you never become a teacher. If you are a teacher and are undisturbed by this image, do the country a favour and quit.

If you are one of those ‘tough-love’ donks….”won’t do her any harm……toughen her up….teach her what life is all about” then get off the planet. You’re a threat to society.

And yet. We [the voting public] ordinary folk won’t do anything about it. NOT A MURMUR. It’s as if average Australian citizens support an anti-child jihad designed to destroy the personal comfort and well-being of school children, as soon as they turn seven-years-of-age.

It’s real. Those who organise and run schools are more culpable than any others. Unthinking State Ministers continue to neglect their responsibilities to care for kids. They carry the can. They have the political power to cease the abuse immediately. Principals have the professional power to do much the same. They just need to say, “No more!” for pure professional reasons. Immediately. Teachers have the union power. They have to negotiate and tend to talk too much. Parents have real power. It just takes so long…one at a time saying “No!”; although they do have heaps of organisational muscle if they wish to use it.
It’s all so sad. Nobody uses the power that they have. Kids bawl their eyes out. Vomit. Don’t sleep. Don’t eat. Nobody cares.

The nastiness has a profound effect. Derek Hedgcock says that “Emotional wellbeing is the essence of beneficial learning.” “Emotions determine what we learn and what we forget”
He asks whether our benighted testucating commanders “….understand that learner variation exists across emotionally connected dimensions as a compelling, ineluctable, genetically inherited disposition…..only modified and ameliorated by nurture…..
….as opposed to coercion… one-size-fits-all assessment and instruction strategies that are morally reprehensible…. in an age when scientific discovery reveals more just and diversely accommodation alternatives for education to explore, apply and refine.”

Derek writes “Dangerous Ideas” for this week-end’s Treehorn Express. He follows Kelvin Smythe who illustrates conclusively that some terrible things have been perpetrated on children because school education has not been run in good faith; and fits with my own paper, earlier, which points out that such child-abusive operations are embedded in our culture because of the prevailing totalitarian notions of governance. The neoliberal coalition of ideologies shared by the major parties in Australia is responsible for the maintenance of these purulent coercion and threat processes, because their big-business masters want it that way – for profit – and because they do not know any other way.

They just don’t care about kids. This unfortunate little girl cries so profusely because they all want her to react this way. Fear is the essential element of NAPLAN. This image reflects what is happening to thousands and thousands of her age cohort every May….and we don’t seem to give a damn. It’s not to our credit that we allow it to continue.

Fear-based schooling in Australia is only available through the government agencies of Murdoch and Pearson.

New York is where Rupert Murdoch lives and rules his world-wide testing empire. New York is where Joel Klein, the prophet of fear-based schooling and stern instruction lives; and runs Murdoch’s billion dollar testing industry for him.

New York is where Julia Gillard found Joel Klein and subsequently introduced his schooling system based on NAPLAN testing to Australia. He continues to exert his control.

You know that……don’t you? New York is our holy land.

Even Pearson, the British education testing conglomorate whose earnings in 2011 were $US 1.5 billion is moving some of its avaricious enterprises to New York. That’s where the testing money is. Teacher Performance now. [Watch our Punch-us Pilot Pyne get on to this!]

“Starting in May 2014, Pearson Education will take over teacher certification in New York State as a way of fulfilling the state’s promised “reforms” in its application for federal Race to the Top money. The evaluation system known as the Teacher Performance assessment or TPA was developed at Stanford University with support from Pearson, but it will be solely administered and prospective teachers will be entirely evaluated by Pearson and its agents.’

New York is, also, where Diane Ravitch lives. She is a Professor at New York University, a highly respected opponent of the use of high-states testing in schools that is organised and manipulated by the growing, greedy money-making test industry. She is super-active in trying to persuade the parents and teachers of the world to reject the curse of Standardised Blanket Testing. She appeals to basic common sense and education knowledge of children’s learning. It’s a tough job.

{Isn’t it a crazy world when one considers that Standardised Blanket Testing degrades children’s spirits and learning potential everywhere and yet there is such a hullabaloo !}

She recently pleaded with each of us to share a short video clip with as many people as possible in the hope that the clip  would go feral.

If you have a soft spot for kids, I do hope that you will share this video clip with as many people as possible and make sure that it is shared around schools down under; with colleagues in our work places and with as many friends as possible. It needs to go feral. It’s parents and kids talking. If it doesn’t convince you, you’re a real basket case.

There are so many reasons for the Murdoch inspired mega-maniacal greed for money now ruining the human spirit of learners in schools everywhere to cease. While Australian politicians fight like Kilkenny cats over money [Gonski money], there’s not a bleat about the social injustices being perpetrated on our children nor about the assault on their aspirations. It’s all such crazy stuff. The introduction of NAPLAN was a dumb explosion on our wits. It not only created classroom chaos, but it shut everybody up.

Here’s some reasons why NAPLAN must go. None should be treated lightly. You tick the reasons that you think apply.

REASONS WHY NAPLAN MUST GO.

I hate NAPLAN because it

NAPLAN MUST GO because.

___ Mediocrity becomes the focus ___Failures rather than successes are highlighted ___ 3 days wasted, sweating over invalid tests

___ Endorses cheating at all levels

Give this survey to your local school teachers to see what they think.

Prepared and presented by Phil Cullen,

Such NY tests are constructed by Pearson, the largest testing and assessment group  in the world, in close competition with Murdoch whose test publishing manager is Joel Klein [whom you may see holding Rupert’s hand again at the Leverson inquiry in London next week] . These folk control the school curriculum in all GERM countries, especially Australia where Joel has a vested interest. Of all the bright, intelligent folk in New York [19-20 millions] Julia chose  him, a school-loose ex-lawyer whose knowledge of the classroom is up there with the moon-fairies, to lead us into the future   He, on behalf of Emperor Rupert, and Pearsons share the test market and determine our curriculum.

Their employed measurers ensure what content is taught in schools throughout each GERM country, since the curriculum in GERM countries, such as ours, is based on what is measured  in tests.

This particular test item describes a contest between a pineapple and a hare and will probably become a legendary item.  The story has started to spread.  It was written by a measurer, whom an outstanding quiz expert thinks must have been on peyote.  The question has been used seriously in a number of US states. Peyote, taken from the flower of a cactus plant. is an anthogen that has psycho-active effects. It was used by the author of “One Flew Over the Cuckoo Nest” while writing some of the chapters.  Maybe measurers need this sort of stimulation to do what they do!

Allan Alach asks,”If stupidity got us into this mess, why can’t it get us out?”

OtherTreehorns ? :   Check Recent Posts and Archives in the sidebar.