PLEASE CARE FOR ALL AUSSIE KIDS BEFORE OUR POLITICiANS TAKE US ANY FURTHER DOWN THE WORLD ASSESSMENTS’ LADDER.

FIND A POLITICIAN WHO CARES FOR KIDS and TURN HER OR HIM LOOSE.

1. What is taught and how it is taught in Australia, is decided by one person – the politically appointed representative of the major party in the federal government. [Treehorn Express  18/09/14]

Are lawyers told by a single  politician how to question a suspect, how to write a legal letter, how to exercise their professional knowledge?

Are surgeons told by a lone minister of the crown  how to conduct a serious operation?

Who gave political toughguys permission to tell teachers how to teach?

Why should the ethics of the teaching profession be ridden rough-shod, when teaching integrity is so important for teaching expertise and child learning to prevail?

A failed know-it-all from New York ‘got’ to Julia Gillard and Australia is now suffering a down-turn in schooling, the likes of which we have never known. We’re sinking, fast, because of  NAPLAN. There’s no doubt.

Then……to add to the debacle… 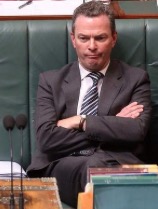 M.L.A. Pyne decided, less than a year ago,  that all community schools in Australia should use direct or explicit instruction to smarten up the kids, especially those who are unwilling to attend school and many of whom have to be rounded-up by Attendance Officers. He has also decided how teachers in such places  should teach.

He thinks that D.I. will help to improve NAPLAN scores. No child love, no compassion, no public discussion, no professional consultation required.

He repeated his edict  through Question Time in federal parliament….. on Monday, 22 September,2015

Aurukun School rioted and teachers were threatened in May 2016.  Kids reacted to the processes of D.I.

“I have spoken!” said our erstwhile minister in September.

It is called big D.I. even though it is based on ordinary d.i. in a quirky sort of way,  Pyne simply gives it $22m out of our taxpayers’ purse to make sure it works. [Plenty of unused Gonski money available.] It didn’t work.

‘D.I’. a  drill to kill  package. It originates, as does the rest of kleinism, in the USA state of educational chaos, NEW YORK.

A fellow party Member of Mr. Pyne, who has a number of such schools in his electorate on the Cape, does not approve, as he states in the article “MP fears indigenous students will suffer under controversial literacy program.”

What, indeed,  gives Mr. Pyne the right to indulge his craze and be at odds with colleagues and state ministers and concerned educators?

What if Queensland  over-rode Pyne’s pranks?  What happens to the 22 million bucks?

What if a conspicuous group of educators with a reasonable amount of political clout, objected to this manic breach of professional ethics?

What if a Union objected to such control politics and told teachers to ignore the issue?

What if principals stood up to child torment on professional grounds?

The odds are, however, that the views of Mr. Pyne, Australia-based greatest neolib- C19 traditionalist, will persist in the same fashion that Julia’s did.

2. There is no legislated safeguard against maverick counter-cognitive curriculum innovations. [Treehorn Express 18/09/14]

No safeguards for what kids learn.

Who knows, apart from its advocates, what impact this notion  will mean?  Why not talk about things, get teacher opinion;  and research the issue in relation to how children learn best and its relevance to life-long learnacy?

It appears  that Australian teaching values have been too corrupted by six years of NAPLAN  unctions, for any general or appropriate challenge to be offered. Australia’s future is dead in the water, if this kind of political shenanigans continue. That’s for sure and certain.

looking for a decent political party to vote for….one that thinks