Neoliberalism as an economic device has been around for about 25 years. It impacted on world politics at about the same time as managerialism’s organizational rearrangements. It has proven to be an unhappy marriage.

The meaning of “Liberalism’, in this case, images the Australian meaning ….a conservative, anti-Labour political movement that represents the interests of business….and not in the literal sense of free-wheeling. The addition of the prefix ‘neo’ or ‘new’ to the maxim presents it as an ideology, a pious revival of ‘free’ enterprise, ‘free’ trade, ‘free’ competition, ‘free’ rights to make as much money as possible. It has been described as a capitalistic desire to turn the world into one big shopping mall where anything at all can be bought and sold…..goods, children, workers, smaller businesses, ‘even a whole country’. If a government enterprise makes a profit or has the potential to do so, such enterprises [railways, bus services, schools] should be privatised for profiteering purposes. The principle of Gekkoism – ‘”Greed is good” – is the guiding light.

Rearranged governmental management aka managerialism, based on academic modelling that removed ‘experience’ from administrative requirements, made things a lot easier for favoured ticket-holding sciolists to rule the roost and reinforce neoliberal acquisitions.

These neoliberalism’s ideals are now entrenched in the basic activities of all major political parties: Labor and Liberal [Aust.]; Republican and Democrat [US]; Labour and Conservative [UK]. There is no real difference between parties, no choice for voters. No party will stand up for kids or treat them as human beings; and it shouldn’t br such a difficult political activity. Kept under control, the back-bench silent majority in each place has no clout and lacks the gumption to try too hard.

“Just as Wall Street has captured corporate America, so has it captured Washington. Few mainstream politicians on either side of the aisle have much interest in fixing things, since they get so much of their financial backing from the Street. Unfortunately for them, the fringes of their parties – and voters – do care.” [Rana Foroohar :Time Magazine July 21 2014. P.15]

I’m not so sure. In Australia? Our fringe-dwelling pollies don’t show much sign of caring, although it would double their votes. Their excuse is that the forces are too heavy. The party bonds are too tight. It is obvious that their counterparts in neighbouring New Zealand care a lot more about schooling ,and will try to ‘fix things’ this year. God bless them. Interesting, don’t you think, that two small countries on opposite sides of the world – Finland and New Zealand – will lead the world in their advocacy for affective and effective schooling?

Despite the serious efforts that Australian schools make in order to cope with the neoliberal politically-based wrecking of a needs-based, affective, achievement-oriented curriculum, there seems to be little indication that things will change during the next decade unless the back benches of the major parties, all of the minor parties and the independents step in. This writer thinks there is a chance for backbenchers to uphold the dignity of a possible democratic regime, slim as it may be. To date however, these ‘fringe dwellers’ have been asleep in the benches [of the house] and in the trenches [of the party room]. They have failed to take an interest in what is happening to Aussie kids at school. The higher-order politicians are busy arranging the local culture for higher profits for their neoliberalist sponsors by using children as inanimate robots; and the backbench mortals in the various political parties let them get away with it. Morally childless, they don’t care much about kids. They are probably not even au fait with what their party’s policies do to kids.

The issue is extremely serious. Australia shouldn’t wait until the social-strain theory becomes a reality, as it has in ages past. The imbalance between the cultural goals of schools and the needs of the greedy is profound. The moral deviance of kleinism’s fear-based schooling has gone too far. It is causing the fabric of a genuine democratic country to disintegrate. Margaret Clark agrees.

The mid to lower levels of Australian society have been sucked in….and say nothing….not even the mushroomed parents kept in the dark. Banking and large corporations, the High Priests of Wall Street are confident that their financial accounts will keep improving, as long as the fringe-dwellers of all political parties and every-day mums and dads remain silent.

I rant , like our observant and child-concerned teacher aide who seriously cautioned parents to pay more attention. Just the same….

Please let me take this further.

The religious fervour of neoliberalism dominates the lives of every Australian….whether they realise it or not. It is a form of religiousity that is an outcome of the profit-based ideology of the mega-rich. We mere back-benchers and ignorant citizens confirm by our actions and lack of action, that that is the way that things must be. All Australian politicians not only believe in the neoliberal articles of faith based on the leifmotif : PROFITS BEFORE PEOPLE; it has seeped into their very being and has become their battle-hymn. Check these cartoons. Get the messages? 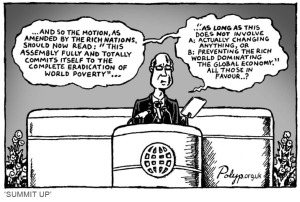 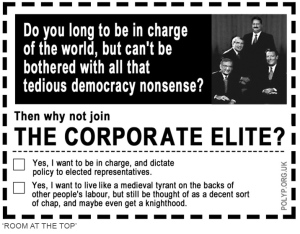 We have all been conditioned to ignore the aspects of social justice exposed by cartoons such as these that highlight the requirements of neoliberalism: that all should learn, work and slave hard to maintain the superiority of the rich in all aspects of decision-making; that issues of equity are ignored when it comes to basic human rights like worthwhile schooling; that better care is taken of charter schools than for neighbourhood schools; and that the parents of most attenders at high-fee schools make poor judgements in their selection. These and other issues within the moral/political/ education trinity are now part of the value systems of most Australian people; and, to our great discredit are entrenched in the mores of those who run the schools , where Australia’s future is located.

Neo-liberalism in action is akin to the catholic church in action. Their modus operandi deserves comparison. As a practising catholic, proud of it, I can say this without bias or disrespect. The pope in Wall Street is infallible in matters of political policy. His regular encyclicals and thoughts control the daily agenda of all western countries; and other countries as well.

His political cardinals [first class], holding high office in very important political positions, report to him when the opportunity presents itself for a papal blessing; and he issues papal bull to them at appropriate times, personally, or through his high priests in his news-media temples situated in strategic locations around the globe. His word is sacrosanct. Deviation is punishable. .

His Immenseness can change the liturgy in a wink without notice or question; and even the faithful naplanners [i.e. a branch of the trapped monks] way down under will obey. Supplications for more testing, more charter and independent public/private schools will intensify; and some of his cardinals [ 2nd class], splendid ministers of his faith, will added to the pleas “More packaged D.I., more fear, more robustness, more phonics.” Such ministers are exceptionally gifted, vociferous advocates. Beatification in their after-life is assured. The bedevilled child-loving, papa-respectful congregation will bow their heads and just wonder.

This religious kind of network is much, much larger and probably more efficient than the admirable [Weber-ish] bureaucratic organisation of the catholic church. It encompasses millions and millions of buddhist, moslem, shinto, christian, atheist, agnostic, sikh and all other arrangements of a religious nature who accept the Gekko mentality that “Greed is good…..no matter what the cost to human dignity or morality or caution.”

His infallibility dogma is aggressive and It is virtually impossible for those who care for kids to stand up to his crusading army of lobbyists, big-time donors and media units dwelling within his ministerial offices. Their purpose is clear. Round up more neolberal true-believers.

We all – christian, moslem, jew , atheist – despite the frightening, hopefully far-removed, overtones, are expected to accept all the tenets and political ploys, politely; and just not bother to care too much about the probable future.

Australia’s choice is between our basic christian love for children….or….neolibs’ love for money. The conditioning processes have forced us to become consubstantial with our children’s persecutors. It’s very sad, but it is a fact of life.