We sure gave him a bad time, didn’t we? Corporal punishment which has not been dispensed in any Australian school for many decades hit the headlines when it was mentioned in passing by a famous Australian ‘educator’ who has the ear of the Minister, the print-press and television shows. This expert is so well known, that you know who he is without his name being mentioned, don’t you?

His opinion is more highly regarded by political power-brokers than anyone else in Australia at the present time, it would seem. He has been featured in newspapers, TV shows, magazines and been the subject of endless letters to the editor, because our sanctimonious commentators don’t like to think of our school children being hurt….physically, that is.

People are funny cattle. They can lambast an inexperienced, but noteworthy school critic, yet tolerate the insane cruelty perpetrated on a million school children every year, the kind of cruelty that damages a child for the rest of its life; remaining constantly silent about this annual child-bashing catastrophe! Australia has developed a mind-set that treats its children in an extremely casual way. Just as one cow said to the other “Mooooo.”, the other replied, “I was just about to say the same thing”, they’ll scream blue murder about a bruise on the bum, because it’s easy to talk about and has a compliant audience; but ignore the emotional assault on our children’s psyche because those elected to power tell them that it is okay to ignore this sort of thing. 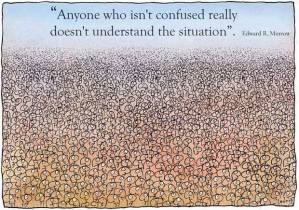 Mass emotional assault on school children is now a fact of life in this place. It is government sponsored, and operates deliberately under an avalanche of gimmicks that just don’t work. Each is a cover-up, a diversion from the reality of achievement-based, purposeful schooling. Each tries to disguise the Naplan damage. If the Klein-based schooling system, started in 2008, is not now bordering on chaos, it is certainly confusing. Leunig, once again, illustrates the confusion.
While a smack on the bum draws more attention than more serious damage……

Not understood, we move along asunder;
Our paths grow wider as the seasons creep
Along the years; we marvel and we wonder
Why life is life, and then we fall asleep
Not understood.

Not understood, we gather false impressions
And hug them closer as the years go by;
Till virtues often seem to us transgressions;
And thus men rise and fall, and live and die
Not understood.

Not understood! Poor souls with stunted vision
Oft measure giants with their narrow gauge;
The poisoned shafts of falsehood and derision
Are oft impelled ‘gainst those who mould the age,
Not understood.

Not understood! The secret springs of action
Which lie beneath the surface and the show,
Are disregarded; with self-satisfaction
We judge our neighbours, and they often go
Not understood.

Not understood! How trifles often change us!
The thoughtless sentence and the fancied slight
Destroy long years of friendship, and estrange us,
And on our souls there falls a freezing blight;
Not understood.

Not understood! How many breasts are aching
For lack of sympathy! Ah! day by day
How many cheerless, lonely hearts are breaking!
How many noble spirits pass away,
Not understood.